I played with my UNI-T UT61E and Linux before. But now a friend pointed me to a little graphical display/grapher 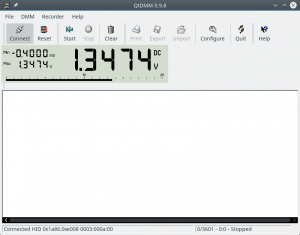 for the DMM data called QtDMM. It looked interesting but it did not work completely for my meter:-( So I looked around and found two source bases, one on github which was moved to Qt5 and the original version which is still based on Qt4. Both seem to have moved apart a bit but neither worked really for me. So I picked the github base, partly because I’m running Qt5/KDE and partly because it seemed easier to keep it sync.

So I had to do a couple of things:

Overall, I’m happy with this little excursion in C++ and Qt5 land. Things seem to work for what I tested. If somebody wants to play with it, yet another fork of the code is here: github.com/mw46d/QtDMM.I’m not planning to take this over, but iff I find problems, I”ll try to fix them.

As always, have fun at what you’re doing;-)