OK, so we have two kids and they are now grown somewhat and attending the Tracy Learning Center in eight’ and sixth grade. So every March for the last couple of years, there is the big regional Science Olympiad. This year, it was last Saturday, March the 6th.

But the big competition is only the final step. A lot of preparation is done before the big day. The first kickoff meetings with the interested students start normally in early December. Then the preparations kick into high gear with the beginning of the new year.

There are different kinds of events. From learn/test setups, over hands-on labs, to build-at-home and run at the competition tasks. The kids normally choose during the initial meetings, which events they would be interested in. Then they study and prepare primarily for those events. Sometimes, people don’t show up, so a bit wider preparation is probably a good thing.

Since I’m more the hands-on type;-), I got to help with two `build-at-home’ events. 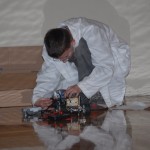 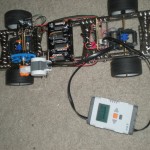 With our son, we tried to build a Battery Buggy. There the task was to build a battery-powered car to run fast and close to a point, defined at the competition. So the car should go strait, fast, and have a way to define a distance. No big electronic allowed turning the run, so it needed to be some kind of switch. The idea was to use a nut on a long threaded axle to trigger a micro switch. I tried to use a a little LeJOS program to help with the adjustments. But in the end, the overall setup did have too much variance to really land in the ranks. The NetBeans project for my little program is here: BatteryBuggy.zip 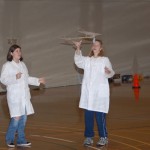 With our daughter and another girl, we built some very light 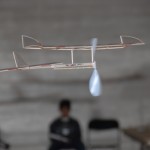 rubber-band powered airplanes for the Wright Stuff competition. So the airplane needs to be heavier than 7 grams (the weight of two dimes and one penny), have a rubber-band motor not heavier than 1.5 grams and there are a couple of other size limits. The goal is for the airplane to stay in the air for as long as possible. The airplanes flew very well before (at our gym) and after the competition;-( The only problem was, the first rubber-band during the competition snapped and bend the little axle for the propeller. So the propeller did not turn that good any more until we realized that and replaced it. But the two runs were over by that time:-( Not happy with the final outcome, but we showed that the planes can fly longer than two and a half minutes;-)

Overall, the preparations and the Saturday was fun for me and I think also for all the kids involved. Something which had only very little to do with software;-)

One thought on “Science Olympiad anyone?”