I found a post on the Creator forum asking how to integrate a embedded Windows Media Player into a Creator project.

So I thought, that would be a good time to try and write some custom components.

You could add some elements as static HTML but then the JSF framework would not know anything about it and you would not be able to to change the parameter programmatically from the application. So that’s not a good idea.

Edwin has kind of a tutorial on how to write a component library at his wiki page.  So I took some time and played with it.

That’s a screen shot of the result;-) 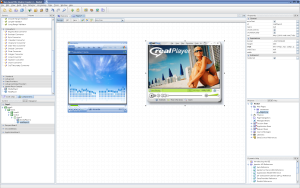 I would not try to put both, an embedded Windows Media Player and a Real Player onto the same page;-) That might get a bit noisy.

Here is a link to my components. They are not fully tested and might not be complete, but I hope they can work as a starting point for somebody;-)  The download contains all the sources and a prebuild complib in the dist directory.  Just import that complib into a Creator 2 EA with the Component Library Manager and you should be ready to play with it.

I’m normally working more on the backend of Creator, so maybe on Monday our component guys will tell me what I did wrong;-)  But I think the results are not that bad for five hours play time;-) Especially given that I normally don’t even work on Windows;-)

9 thoughts on “My Adventure in Component Land”