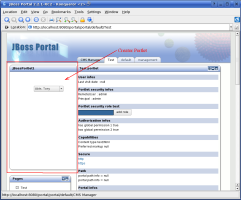 OK, after I found the solution for the JSF API classes (See the entry below), I hoped to get a Creator 2 Portlet project deployed to the JBoss Portal as well. It worked;-)

It was just a matter of removing the WEB-INF/lib/jsf-api.jar and adding all the needed configuration WEB-INF/jboss-*.xml files.

Then just deploy the war file and add your new PortletInstance somewhere into the Portal. Of course, you will probably do it a bit better than what I did in the screen shot;-) But I don’t claim to have any experience with JBoss Portal and for me it’s more important to get it working.

Have fun with your portlets;-)

* Create a WEB-INF/foo-object.xml, find a good example in the jboss-portal-2.2.1 users guide, chapter 4.1.1. The only interesting part is the <component-ref> element near the end. That value has to be your_app_name.your_portlet_name . The your_app_name is the one you have choosen above, the your_portlet_name comes from the <portlet-name> in the WEB-INF/portlet.xml.
* Package everything up and deploy it;-)

I hope this helps a bit;-) Thanks to J. Viet from the JBoss team for helping me figuring out what I needed to do here;-)