The reason for the maglev track and the photo gates was actually to test vehicles for the Science Olympiad Division C – Maglev event. Unfortunately, in San Joaquin County, this was a closed event, so I don’t have a video of the actual run.

But below is a video of the winning vehicle later in our living room. The event distance was set at 70 cm, so that’s the distance in the video as well. The vehicle took 0.54 seconds for that run, but that was one of the slower ones. Test runs were as fast as 0.49 seconds for the 70 cm distance. The weight of the vehicle as run is 523 grams.

That would have been a Vehicle Score of 969 in an official run.

The official run last Saturday helped our son a lot to win the first place in this event. But Maglev is a dual-event, which has a exam/test and the build/run part which are weighted equally. 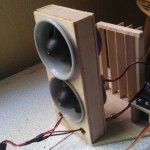 Update: Comments below asked for some close-up pictures. The vehicle does not exist any longer. But the motor mount is now part of an experimental hovercraft setup. I took some photos of that, the motor box is still the same. A box out of model-grade plywood (LxHxW: 25mm x 150mm x 67mm) with holes for the fans and two smaller holes to bring the cables forward. The fans are hold in place by those blue rubber bands in the back.  One picture shows the difference between the original intake (top fan) and the cut intake to make the EDF conform to the requirements.

The box was screwed to the vehicle base (another piece of plywood) with two M4 screws, similar to the base it’s on now without the servo & steering setup;-) The battery was sitting on the front part of the base, secured by one of those removable 3M hook strips. So we could experiment with it before deciding on the best spot (balance, …).