OK, this year, it was the second place for our team in the Maglev event in the San Joaquin County competition. I only saw the runs of our vehicle and there the problem was, that it was way too fast. The target time was set at 12 seconds. The successful runs were around 3.7 seconds:-( Way too fast. But trying to slow the car down and it would not start at all:-( So there is probably a better way. If next year has similar rules, I guess we need to experiment with side magnets to keep the car from twisting?! But at least the moving weight of 1950 grams (weight limit was 2000 grams) helped the score;-) 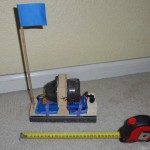 Some more details of 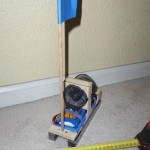 The maglev magnets were built out of  8*4 of the Kelvin maglev magnets each. That was partially needed to float the weight, but also to as weight low in the vehicle. They were glued together and to a steel profile at the top.  There was a little box between the magnet assemblies to keep them parallel to the sides. It was also used to add more weight low in the vehicle. All of that was attached to the plywood base via the usual Velcro strips. 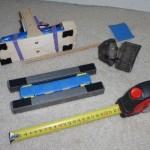 We experimented with a 1.5 Ohm 20W potentiometer (actually a 3 Ohm potentiometer parallel to a 3 Ohm resistor, both rated at 20 watts). But that did not work so well. It worked as expected to slow the motor down. But even minimal slowing was too much to get the car started reliably:-( More to experiment with next year;-)

The blue rectangles in the last image are extra weights which were normally under the battery to come close the the weight limit;-)